The Law: If You Served, You Are a Vet 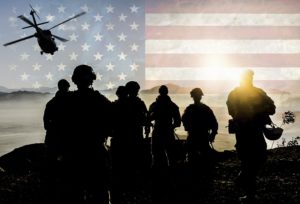 Silhouettes of soldiers during Military Mission against American flag background

This may shock you, as it did me, but some Vets don’t think they are Vets. WHAT?

A former Marine turned lawyer told me that the reasons are complex but that he believes it is based on the fear of claiming an honor that is not rightfully yours. He explained that these people would never say they were a combatant if they weren’t, nor wear a ribbon they did not earn. The oddity is that these people are full, legal Veterans.

He told me of a former soldier who would not apply for V.A. hospital care since he felt the people who served 20 years deserved that, not someone like himself with a 4-year tour. I was told of a widow who declined Taps to be played at her husband’s funeral since he was not a career service person.

So, let’s stop this nonsense. Here is the legal definition straight from the Veterans Administration 38 U.S.C. § 101(2):

The term “Veteran” means a person who served in the active military, naval, or air service, and who was discharged or released therefrom under conditions other than dishonorable.

OK, this is in governmentese and probably written by a lawyer, but it just says if you served, and unless you were dishonorably discharged, you are a Veteran.

There are a lot of benefits that the state of Alabama provides to our Vets. Additionally, the state’s legal community and several law schools offer free legal help if the former service member can’t afford it. I hope that all our Veterans take advantage of these. They earned them.

Join me and say thank you to a Vet. Let them know that though their service may have been decades ago, it is not forgotten.

A personal note. Thank you to the families. Your sacrifice makes the Veteran’s service possible. We sincerely appreciate your sacrifices to keep us free and safe.

Join us on NBC 15 LawCall here in Mobile every Sunday night at 10:30, right after the news. We are taking a fall break and will offer 5-minute segments for the rest of the year and a live call-in segment every Monday on NBC 15 at around lunchtime. You can also call the Eiland & Ritchie offices at (251) 666-1212. We specifically set aside a few hours Monday morning to answer your questions.